Band break-ups are the worst thing known to mankind. But not even the end of Paramore made me feel as upset as what I found out last night did.

Yesterday saw the end of the most ingenious duet of the decade. It said goodbye to Megan White and John Gillis. You may know them as Meg White and Jack White. Or, The White Stripes. 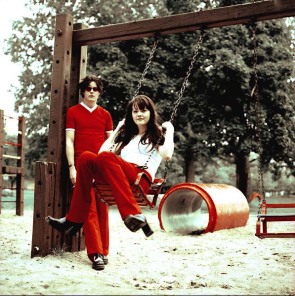 On their website, they wrote, “The White Stripes do not belong to Meg and Jack anymore, The White Stripes belongs to you now and you can do with it whatever you want. The beauty of art and music is that it can last forever if people want it to.”. I’m not sure what to make of this message, but it makes things clear: The duo are no more.

It is old news, however, that they are not brother and sister, despite their somewhat similar looks and the sharing of a surname. I do hope you all know that… 0.o

After over a decade of being together (as a band, of course!) , they have decided to put us all out of misery. Because at first, the news hit me like a brick. But after a little while, it sort of started making sense: what with the last tour being back in 2007, as was their last studio album. And with Jack White’s countless side “projects” (such as The Raconteurs and The Dead Weather), it is little wonder that poor Meg developed some anxiety problems… (Yes, I know her “acute anxiety disorder” was back in 2007 too, alright? :P) To brighten the mood though, here are 10 Things That Probably Stressed Out Meg White, heheh (:

They are no more, but the duo have a valid excuse: “It is for a myriad of reasons, but mostly to preserve what is beautiful and special about the band and have it stay that way.“. They did the right thing, methinks – they didn’t forcefully drag out for more than they could, which means that the beauty of their music will forever be intact.

For me, what was special about the White Stripes was their complexity, incredibly captured in such simplicity. Most their tracks contain just guitar and drums – and at times a piano – but that’s it. Very little studio correction. Everything about them is just so real – which I don’t doubt is the deciding factor as to whether people like them or not. Personally though, I love their trademark raw and distorted sound; especially in Black Math! (sorry, I couldn’t find a video with a quality higher than 240p >.<)

So I shan’t drag this post on for much longer, although I would very much like to, and instead will leave you with one of their masterpieces with a ridiculously epic riff. It goes by the name of “Icky Thump” (:

Keep an eye out for The Dead Weather though! (:

← I See Skins.
The Promise that looks promising. →

One thought on “Farewell, White Stripes.”