We’re Rolling In The Deep.

Following the Comic Relief show (of which I only watched snippets here and there), I am starting to realise how stunning Adele and her music actually is. I’ve never really paid much attention to her at the time of her “19” album; sure – we’ve all heard Chasing Pavements, but my attention wasn’t caught fully until that Comic Relief show. That girl. Wow. 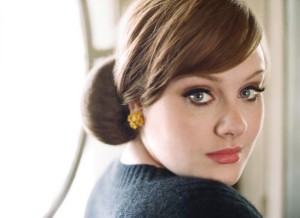 The reason I’m only writing about her now is because this epiphany occurred fully only during my return journey from Glos to Berks yesterday; I sometimes have to thank the otherwise awful charts show on Radio 1!  (Saying this though, Radio 1 isn’t quite as bad as some of the other stations out there… *ahem Capital and their awful Summer Balls..*).

Anyway, Adele. “Rolling In The Deep” came on first; great song. I didn’t think much of it though, probably wouldn’t have put it on my iPod or anything. About an hour later, however, “Someone Like You” is playing and I get goosebumps and I’m fighting the urge to cry when I think of that video that played behind her performance on Comic Relief (HERE!)…and – inevitably! – analysing the simplicity of the piano behind her flawless voice. Alright, so I don’t want to sound like I’m trying to sell her or something, but I just need to share this newfound admiration I have found for her music! One of the comments on one of her videos:

“My 9﻿ year old daughter is addicted to Adele. Im happy she is because it is inappropriate for her to be singing about bluffing with her muffin.”

ION, 3 weeks of school left (with a two-week half term inbetween ><) and school is over… GAH. EXAMS. FML. On top of that, I still need to finish recording 2 of my music GCSE compositions (only one of which I have fully planned out D: ) and record two performances >< Taking music at Herschel is possibly THE biggest regret of my life! …and everybody else’s in my music class, too. Hallelujah if any of us manage to scrape any A’s.

3 thoughts on “We’re Rolling In The Deep.”