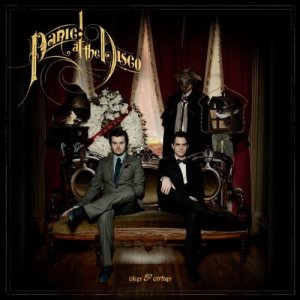 There is actually nothing better than accidentally coming across bands/artists that you no longer really listen to, but used to be a huge fan of. Perhaps the fact the the band has partially broken up by now is a little disquieting; perhaps you die a little inside when you realise your favourite band member has gone off somewhere and turned into some hipster. Not that I dislike the Young Veins… – their all-too-mellow music is simply so much different to the Panic! At The Disco that I once upon a time knew and loved. My obsession hibernated for a few years…. It’s now awakening.

“Vices And Virtues”, being the first P!ATD album released as a duet rather than a quartet, seems to have somewhat returned to the original Panic! roots, without the Beatles-y influence (which, after listening to some of the Young Veins’ stuff, was clearly brought to the band by Ryan Ross and Jon Walker whilst they were still there). The album is alright, I mean I wouldn’t mind going out and buying it, simply because it’s made by my once-favourite band. But it’s just not the same.

Does Ryan even own any balls? Nopes.

Ryan’s lyrics don’t have the same power without Brendon’s delivery; Brendon’s delivery doesn’t have the same power without Ryan’s lyrics. The two were like heads and tails – two sides of a coin that need each others’ existence in order to make sense. I know I may be a little late with the whole break up thing (it has, after all, been over a year!), but yesterday I realised I really actually miss the two that left. I also know I can’t be the only one who does!

The two remaining members of Panic! stand strong though. I quite admire Brendan and Spencer actually, for despite the painful break-up, they continue making music. It’s not the best, but good enough. Speaking of which, they have a new song out soon called “C’mon!”, in collaboration with the band fun., whom I had the chance of seeing whilst they were touring with Paramore last November. They were fun! (p-dum-pum-tschh…). The new song is good, check out the link (: