Hi there. I seem to have drowned in the ocean of coursework, thus seemingly vanishing from planet Blog altogether! I won’t even try and excuse myself for having abandoned writing; all I can do is hang my lazy head in shame.

And with this general post, I have no news to bring you – that is, apart from the fact that the Stone Roses are re-uniting. Now, as much as I would love to write a fully detailed post about this world-changing event, I am unable to do so due to the fact that I know zilch about them. NME might know more than I do. In my defense though, I have taken to listening some of their songs and hey, they might be gaining a new fan! 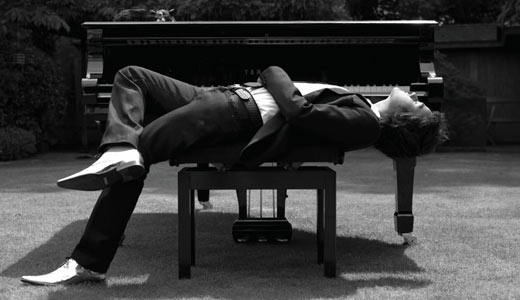 In other news, the Q Awards gigs – leading up to the actual awards ceremony – are now under way. Last night (19/10) saw that one magnificent man, Jamie Cullum, performing his 90-minute jazz-bomb set at London’s HMV Forum. This creature makes me want to cut his hands off and super-glue them to my own wrists, I swear. What makes Mr Cullum so fantastic is his versatility; not only with his own material but also the fact he can cover any song out there and completely Cullumise it. During last night’s gig, he had done justice to Radiohead’s “High And Dry“, (a ‘tick’ from me), as well as Lana Del Rey’s “Videogames” (another ‘tick’ right there) ( – no video of that  by the way, none are available yet…). He just ticks all boxes imaginable! And also, now that he’s had the baby, he ticks the fatherly potential box too. “I haven’t seen you all for quite some time because I took some time out to have a baby…Well, I wasn’t having the baby. That would be a miracle of science! But anyway, it is great to be back.” Sophie Dahl is a very lucky woman indeed. But enough drooling over a man twice my age.

Crikey, I’d never thought I would ever say that.

Whilst we’re on the subject of jazz and pianos (and note my cunning earlier mention of Radiohead in order to move swiftly onto the following point…): Radiohead! “Paranoid Android” has been voted by NME.COM as the best song from the last 15 years. It has also been voted by Kaja as the best song of her life. Therefore, this news pleases her greatly. As a little celebration (and also to conclude this post), I leave you with a magnificent, jazzed-up version of Paranoid Android by Brad Mehldau. One of these days, I WILL record a cover of it. Just you wait for me (: Peace!