Race for the Cinema Beacon with Two Doors. 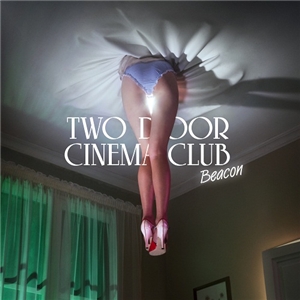 The two-doored club for cinema-goers, i.e. Two Door Cinema Club are back like a shining beacon. In truth, they never really went away; nonetheless, they have returned! The trio bring along with them a new single, ‘I Sleep Alone’, released 21st July, which doesn’t fall short of their usual high quality produce. Melodic guitars: check. Lyrics about crazy lucid dreaming: check. Suggestive single artwork: check. Get-up-and-dance-arena-filling-anthem-potential: check. See proof: below.

This chirpy track is one of 11 off Two Door’s upcoming new album, ‘Beacon‘ (3rd September), the follow-up from their debut ‘Tourist History’. Naturally, the band announced a few intimate shows to promote the release of the album; naturally, tickets sold out within SECONDS and I was not one of the lucky ones… Racing for tickets against the basement people (i.e. TDCC fans) is like competing in the 100 meters against a bunch of Usain Bolts. Luckily, the band has promised a full UK tour scheduled for later on this year! If I don’t get my greedy little hands on at least one of THOSE tickets, you are safe to expect a rather rantful post from an enraged Kaja soon afterwards.

← Lifted From The Smoke – The Peasant Dramatic
The Chevin – ‘Blue Eyes’ →

One thought on “Race for the Cinema Beacon with Two Doors.”